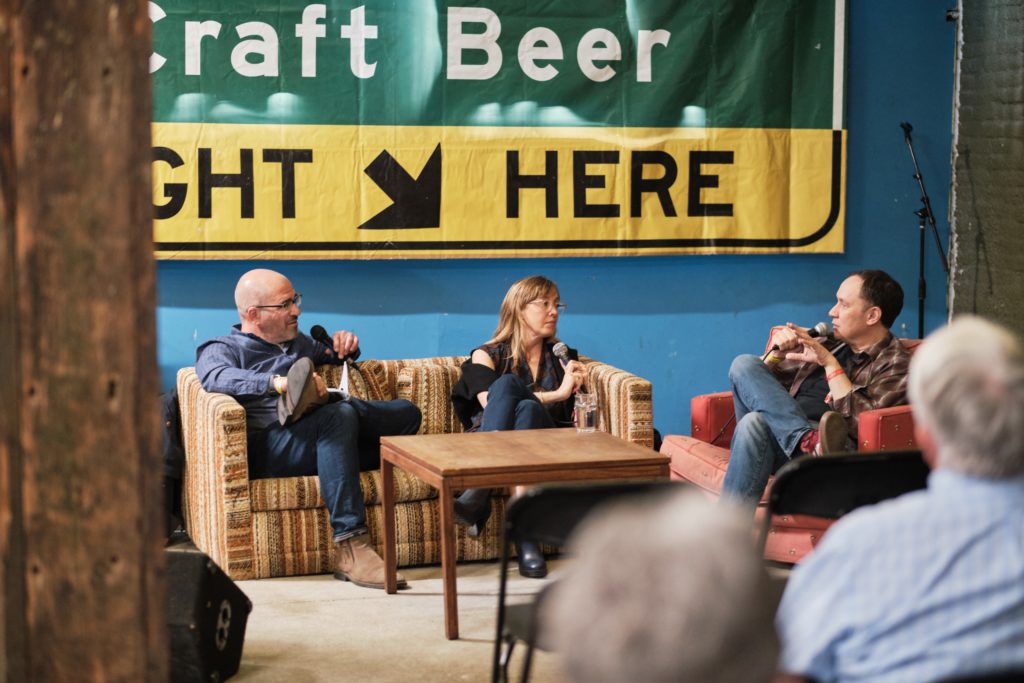 Celebrating innovative, engaging and entertaining podcasts of all genres, more than a dozen of your favorite (and soon to be favorite) podcasts will be live recording at Treefort 10!

The Podcast Stage is located at Boise Centre East and is free and open to the public of all ages. You don’t need a Treefort Pass to attend any podcast events.

Check out the pods and podstars who will be performing at Treefort 10 and be sure to add your faves to your schedule on the Treefort App.

Copper & Heat challenges the exclusionary systems that cooks and chefs have been upholding for generations. They focus on issues that underpin and enable exclusion in the restaurant industry that many don’t question, starting conversations with the people that are working through these issues in restaurant kitchens every day.

They’re old! They’re queens! There’s two of them! It’s Two Old Queens! Join Mark Rennie and John Flynn as they search for the gayest movie ever made, using a byzantine ranking system, their own hard opinions, and some inevitable controversies from a stacked lineup of guests.

Gayish is an independent, award-nominated gay NSFW podcast where Mike Johnson and Kyle Getz talk about a different gay stereotype each episode. We bring research studies, news stories, history, personal experience and expert guests to the table when we discuss our topics.

TURNED OUT A PUNK

Turned Out a Punk is a long-running weekly podcast. A show that has had everyone from Anthony Bourdain to Jack Black to Laura Jane Grace sit with Damian and talk about how punk has touched their lives over the course of it’s 300 plus episodes. Hosted by Damian Abraham of the hardcore punk band, Fucked Up.

Treasure Valley Podcast is a local production that frequently features musicians from the Boise area. Each month we record a live musical performance in our DIY home studio as well as interview the artists. We have a variety of guests on our podcast but musicians are the focus.

The Wind is a podcast about listening, made at a handmade desk in the Sierra Nevada. It’s a sound-rich show that’s covered everything from cowboy yodeling to gender neutral language, aeolian harps to scores of old westerns; all approached from a practice of deep listening.

Julie Robinson and Alex Milles discuss how they met and The Table Rock‘s intention, foodies sharing food while chatting about Boise and the greater Treasure Valley community. In the first season, they’re exploring the State of Food.

Come along on an exciting adventure with Live D&D: Hackfort Edition! Watch as our DM Daine leads a group of intrepid players through a one shot adventure!

It is my intent to craft a narrative-focused Tabletop Role Playing Game (TTRPG) One shot for a debut at Hackfort. Through the lens of storytelling, we will have an adventure that is sure to excite both the players and the audience!

Honest Jams seeks to provide a platform for musicians of all kinds, from amateurs to internationally touring performers with a wide variety of tastes and styles and celebrates the joy of musical creation by having the guests and hosts each write, record and share a new song based on a prompt every week.

On Talking Strange, a new paranormal and high strangeness podcast part of the Den of Geek Network, paranormal journalist and TV host Aaron Sagers (Travel Channel/Discovery+ Paranormal Caught on Camera) gathers together notable local names to discuss the weirdest tales of the unexplained in the area.

THIS COULD BE GAY

This Could Be Gay is a podcast on exploring the gay possibilities of pop culture! Each episode, your host Anja and a guest discuss times in pop culture where there could have been LGBTQIA+ representation but there unfortunately wasn’t any and what it could have looked like if things had been a little more queer.

Join them on Who’s Your Mommy as they work to uncover how fictional femmes – from Velma Dinkley to Johanna Mason – helped them realize the badass bisexual icons they are today! Who’s Your Mommy is one part queer analysis and one part movie nerd podcast with a hefty spoonful of sarcasm. The perfect podcast for anyone who felt something change within them the first time they saw Linda Cardellini descend the staircase in that skin tight latex suit in the legendary 2004 film, Scooby Doo 2: Monsters Unleashed.

From Behind Gray Walls at the Old Idaho Penitentiary comes a podcast about Idaho history, true crime, and the stories of the inmates who lived here, written and produced by two employees of the Idaho State Historical Society, Anthony and Skye. Named after a biography written by inmate Patrick Charles Murphy, Behind Gray Walls is a podcast that will bring humanity to the stories you may have heard while visiting the Old Idaho Penitentiary, and some you most certainly have not.

Join comedians & improvisers Jimmy Bowman and Matt Melton on That Baseball Show as they discuss, debate and other D-words all things baseball from the perspective of two lifelong fans.

If you’re looking for advanced analysis & insider insight, this isn’t the show for you. If you want a show that asks the tough questions like “which baseball player is most likely made of bugs” and “is Air Bud: Seventh Inning Fetch a worthwhile entry into the Buddyverse?” along with improvised bits & casual discussion about the intersection of baseball with pop culture, politics, & even history, you just may have found your new podcast home. Join us as we celebrate our weird but never-as-boring-as-you-might-think national pastime!

The Boise Bubble is a podcast about Idaho and the Treasure Valley issues. From food to infrastructure to local adventures. Brought to you by Shane & Natalie Plummer of @hellomeridian.

Stories scattered in the dust and wind, things picked up once and then forgotten, scraps and memories: Sage Country Fragments is a storytelling, poetry, and music variety show built from scratch in the southern plains of Idaho.

The Bottlecap Brigade is a narrative Dungeons & Dragons YouTube channel and podcast. They’re an example of what happens when a bunch of creative closet-nerds get together and start a Dungeons & Dragons live stream. Are they good D&D players? No. Can what they play be described as “D&D?” Barely. Do they have fun? Hell yes, and they hope you do too!

The Wandering Ear is an online music publication, podcast, and music discovery platform based out of Seattle. We talk about how music makes you feel & how it’s attached to a certain moment. We’ve been running since 2016. The podcast was created by our founder Daniel Mathia and the reasoning behind it was he wanted to share his love for music and for telling people stories through the lens of music.

Genuine Wrestleboys is a pro wrestling podcast by four friends, made better friends through a love of professional wrestling.

Genuine Wrestleboys was started in June 2017 and is co-hosted by Derek Oster (he/him), Esai Saldana (he/him), Matt Stone (he/him), and Zack M. Evans (they/them), as well as a rotating cast of Mystery Tag Team Partners (guest hosts) and characters from the world of professional wrestling.

The podcast started after Matt and Zack’s significant others begged them to talk about wrestling with each other so they could have an occasional break from hearing about it, which became a group text also including Derek named Genuine Wrestleboys after a dumb joke on a funny YouTube video. Esai was almost immediately added to the group text and within a day or two things had escalated rather quickly into plans of starting a podcast.

The Latino Card is an award-winning Idaho Press podcast. Each episode, hosts Rebecca De León and JJ Saldaña breakdown the stories that are making headlines in Idaho from the Latino perspective.