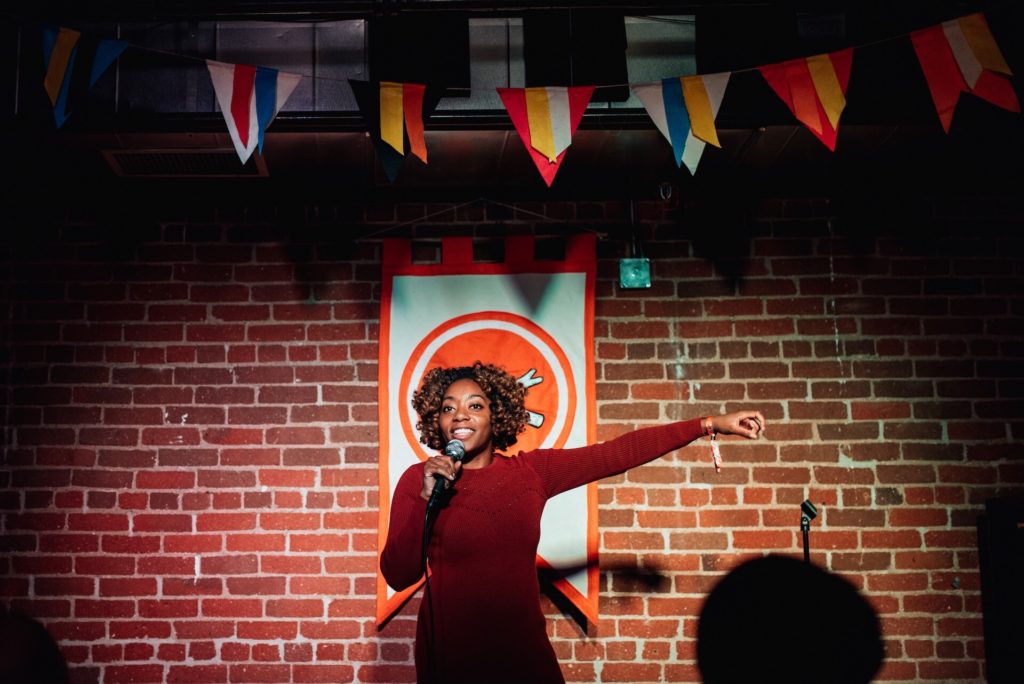 Comedyfort will be bringing the giggles, snorts and snickers to Treefort 10 with this year’s stellar lineup!

We are super hyped to have headliners Chanel Ali and Chris Garcia doing multiple standup sets throughout the festival, as well as an outstanding lineup of comedians from all over the country.

Get your giggle on Friday & Saturday of Treefort 10 (March 23-27, 2022) at the Owyhee and FireFusion Studio. Comedyfort is all ages (some content may not be appropriate for children), open to Treefort passholders and the general public…because after the last few years we’ve all had, who doesn’t need a laugh (or 70) about now!?

Explore the newly announced comedians who will blast your laugh off at Treefort 10 below and get your Treefort pass now to access all the LOLs between all the music!

Chanel Ali is a standup comedian, writer, and actress living in New York City. She hosts the Food Network digital series Food Debate! and was a cast member on MTV’s Girl Code. In 2020, Chanel appeared on the CC Stand-Up/Refinery 29 series Taking the Stage and Speak Up. Chanel was also featured on the dais of the Friar’s Club’s Roast of Gloria Allred, where she is also a member, and she recently wrote for the @NetflixisaJoke social media accounts. Chanel released her debut comedy album CHANEL NO. 1 on 800lb Gorilla Records in June 2020.

Chris Garcia is a comedian, television writer, actor and podcaster from Los Angeles This fall, Chris’s WNYC podcast, Scattered, premiered which Uproxx called “one of the most touching, and funniest, narrative nonfiction podcasts of the year” and Time Magazine deemed “one of the top ten podcasts of 2019”. The limited series focuses on his Cuban exile family and the mystery of his father’s past (in a funny way). You may have seen Chris tell his jokes on his very own half hour special on Comedy Central, This Is Not Happening, Adam Devine’s House Party, and @Midnight. He has written for Comedy Central, Adult Swim, Broadway Video, and most recently wrote for Mr. Iglesias, a sitcom coming soon to Netflix.

Leah Rudick is a comedian, actor & writer currently living in Los Angeles by way of New York by way of Ohio. Her first standup special, “Everything is Fine!” can be seen on the Seed & Spark streaming platform. Recent comedy festival appearances include SF Sketchfest, Laughing Skull, All Jane Comedy Festival & Flyover Fest. She also performed standup on Comedy Dynamics’ most recent season of Coming to the Stage, available on Amazon.

She is the co-creator/co-star of the critically acclaimed web series Made To Order which was featured as one of “6 Brilliant Web Series” in Marie Claire. Her sketch duo, Skinny Bitch Jesus Meeting (Edinburgh Fringe, NY Sketchfest, Out of Bounds) has been a critic’s picks in Time Out New York, Washington Post, and Charleston City Paper. They were listed as as one of the 25 funny people that should have their own television show by Complex Magazine.

Jeff Horste likes to cover lighthearted topics such as book bags, candy corn, and racial inequality. His comedic ability is blessed by whatever God you believe in, so as to not offend you. Jeff showcased his comedic talents on Comedy Central twice. Once with his appearance on Hart Of The City and again in his half hour special, The Next Level, both produced by Kevin Hart. He’s appeared on Laughs on both Hulu and Fox and performs at top comedy clubs and venues across the country. He has performed in Atlanta’s Laughing Skull Comedy Festival, the Boston Comedy Festival, Limestone, and the Oddball Comedy & Curiosity Festival. Jeff possesses the rare versatility to connect with diverse audiences and doesn’t shy away from unique locations. He’s performed in theaters, living rooms, dispensaries, weddings, ice cream parlors, nudist colonies, parking lots, backyards, museums, and hopefully on a “stage” near you!

Mateen Stewart is a Detroit native and a LA local. This Laugh Factory Regular has toured China and Japan and he was recently seen on NBC getting 4th Place on the Weakest Link. Make sure to check him out on Season 9 of Comedy Dynamics’ Coming to the Stage on Amazon Prime Video.

A Bay Area staple who has performed at every club, bar and bowling alley near and far to San Francisco, Chad Opitz has a varied style including one-liners, short stories, act-outs and even songs that offer up a multitude of ways to entertain. He’s been invited to perform in SF Sketchfest the past 5 years and recently returned from a trip to Austin, TX for the Altercation Comedy Fest. He’s opened for Michelle Wolf, Melissa Villasenor, Tom Green, Neil Hamburger and many more. He’s also not a jerk which is pretty cool.

Dan Weber grew up in Tillamook, Oregon which should be spelled with three k’s because well, you know. Having always wanted to do comedy, he waited a mere 24 years to start. The intervening time wasn’t a total waste, as it provided him with a wealth of material to draw from.

Dan talks on stage about all the topics you are supposed to never discuss in polite company. From religion to politics to life experience over-sharing, he leaves no sacred cow untipped. He also likes roleplaying games but please keep that to yourself. Dan has been a part of the Crom and 208 Comedy Festivals and works regularly at Helium Comedy Club in Portland Oregon.

Steve Vanderploeg is a comedian, writer and improviser based in Denver, Colorado. Steve is the founder of a brewery themed touring comedy show known as Rotating Tap, which includes awards such as Westword’s Readers Choice for Best Comedy Night in Denver.

Steve is a regular at the world famous Comedy Works, where he often opens for nationally touring headliners. Steve has been featured as Comedian of the Week on 103.1 FM radio in Denver. He has also performed on over two dozen comedy festivals across the country, including multiple appearances on the High Plains Comedy Festival, 208 Comedy Festival and Rogue Island Comedy Festival. Steve consistently works with people much more famous than him, and usually, they like him.

Escaping deep East Oakland many years ago, legendary comedian Papp Johnson built his name in the Los Angeles comedy scene one joke at a time. Known for being highly controversial, but wildly entertaining, Papp is a future must see.

Jolie Dudley is a comedian, writer, and performer based in New York City. Some of her credits include: Burbank Comedy Festival, New South Comedy Festival, Characters Welcome, and Producer of the monthly dog-friendly variety show Must Love Dogs (and Comedy). Jolie’s 30-minute comedy TV pilot The Pet Parents of New York was recently selected as a Quarterfinalist in the Genre Screenplay Competition and as a Semifinalist in the NYC International Screenplay Awards. By day, Jolie is a career coach in the tech industry and by night she throws all of that sound job search advice away and tries to make it as a comedian.

Eric Cole has been making people laugh for years with his silly style of comedy. Tom Green, of MTV and Freddy Got Fingered fame, said about Eric, “You’re very funny”.

Theresa Bateman is a comedian living and performing in Los Angeles. With a striking combination of dry sarcasm and pure silliness, she has performed at some of LA’s best shows, including: Hot Tub with Kurt and Kristen. She has performed at festivals locally and around the country, including: Cake Batter’s Funny Women Festival LA, the Chicago Women’s Funny Festival, the Comic Cure LA Pride Comedy Festival, Hell Yes Fest and Cream City Comedy Festival. Theresa studied Film production at NYU’s Tisch School of the Arts, as well as Improv at the acclaimed Upright Citizens Brigade Theater in Los Angeles. A spec script she wrote placed Top 10 in Final Draft’s Big Break Screenwriting Competition. She can be seen in the new Snapchat show Batter Up from Scout Productions and performing at stand up shows around Los Angeles.

Lj Sullivan born in LA raised in Boise. After a brief flirtation with comedy at 18 he went to college by 21 he promptly dropped out to pursue comedy seriously, since then he has become one of the Treasure Valley’s favorite new headliners. He has preformed at multiple regional festivals including the Northwest Black Comedy Festival, Idaho comedy festival, and the 208 Comedy fest. He also has a Podcast available on Spotify, Thatf*ckingpodcast. some say his stage persona is like a whirlwind of polysyllabic pontification and pot smoke delivered piping hot promptly to the people.

Ally Weinhold is a Los Angeles based comedian, social worker, and alcoholic. She has performed all across the country, you may have seen her major theaters in Los Angeles, Chicago, New York and Atlanta. Ally can also often be found at local 12 step meetings or crying in Trader Joe’s after the checker asks her how she’s doing in “a really genuine way.” Ally doesn’t care how cheesy it sounds, she really does believe that laughter is the best medicine and that comedy can heal trauma. She is committed to turning pain into punchlines – no matter how many family Holidays she ruins in the process.

Matt Ziemak is a comedian based in Tucson, Arizona. His comedy has taken him all over this very OK country of ours and has allowed him to perform at some amazing festivals such as Bird City, Flyover Comedy fest, Big Pine Comedy Fest and many more.

Val St. Claire (they/she/he) is a Seattle-based comedian who has been hailed for their “”Intense sense of irony”” and “always finding a way to bring up astrology.”

Aside from stand-up comedy, Val is best known for their four-year stint as co-host of the Hot Takes with Hot Dykes podcast with Clara Pluton. They starred alongside El Sanchez the web series Wrestle-Gay-Nia and Reality Rewind. In the sketch comedy realm, they were a founding member of both Deep Lez and Pizza Crush.

Eric Lyons began his comedy career in 2012 at a dive bar in Idaho, where his comedy career largely resides to this day. Having managed the (former) comedy club in his hometown of Boise, Eric left to finish an undergraduate degree in Philosophy with an emphasis in Science and Technology from Colorado State University in Fort Collins, CO. In the time between Eric has performed all over the West opening for performers like Dana Gould, Andy Kindler, and the remains of Jamie Kennedy’s career. You can now find Eric living in Rochester, Minnesota where he lives with his partner Amanda and their dog Ralston (who is a very good boy) producing shows that have featured acts such as Sam Tallent and Dave Waite under the moniker “Dr. Goose”.

Sandi Benton is a Washington, DC-based comedian from Atlanta, GA. Her whimsical, high-pitched comedy touches on everything from ponies to prison. She’s performed at clubs and colleges all over the East Coast.

Fred Le is a Vietnamese-American comedian based in Los Angeles. While living abroad in the country that his parents had fled decades ago, he seized the opportunity to perform his irreverent stand-up to audiences around Southeast Asia and hosted the lifestyle TV show Vietnam: A to Z for VTV International. His family is both very proud and very disappointed in him.

Tyler regularly performs at venues all across the country. Along with live performances, he has written, produced, and acted in a number of filmed sketches and commercials. He is also a frequent contributor to Hard Drive Magazine, a satirical video game publication. Most importantly, Tyler has gone viral on Twitter once. It was a truly great day for him.

As a child, Caitlin McDevitt believed that PBS was funded by a company called “Viewers like you”. The Idaho native has opened for comedians like Robert Kelly, Brian Scott McFadden, and Andy Harris. She produces The Living Room Show DC which makes comedy shows that feel like home, soon to be on Washington DC local access television. Winner of Who’s Up Next at DC Comedy Loft, Caitlin is perhaps best known for her ability to show up on time and rehash middle school trauma.