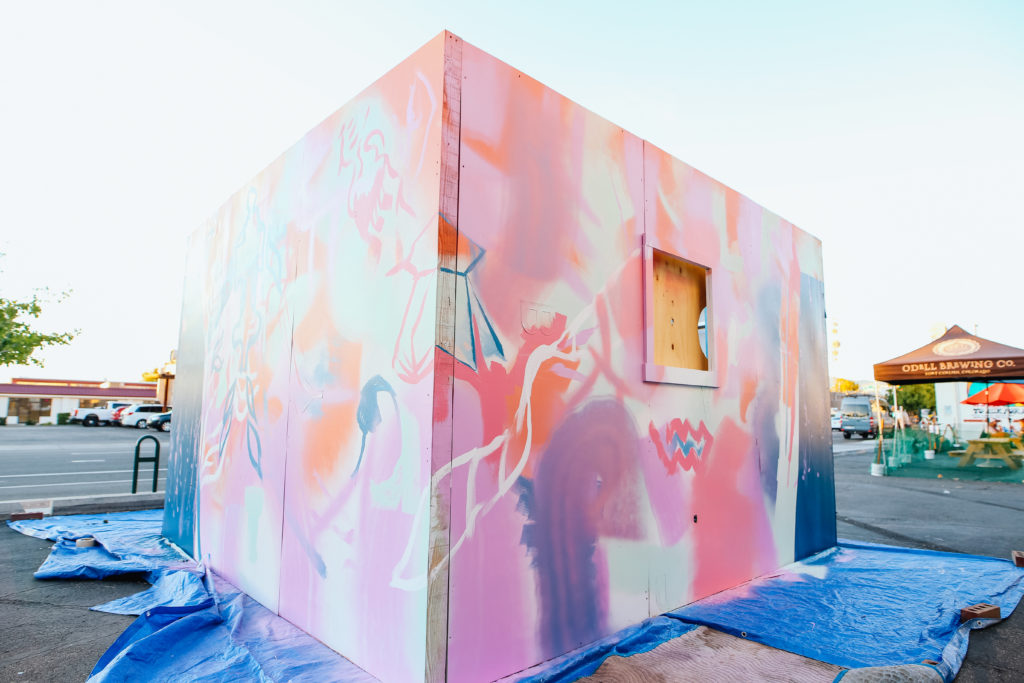 Just like Treefort, Artfort features emerging and independent artists throughout the festival footprint and 2022 is bringing you the best in fine arts, performing arts and public art installations!

Most Artfort events are all ages and open to the public, with the exception of a few 18+ and ticketed events. You can experience Artfort all five days of the fest (March 23-27, 2022).

Check out some of the artists to be featured this year below and you won’t miss a beat if you have a Treefort pass, so get yours now!

All events and lineup can be found on the Treefort App.

The Fungineers are a supergroup of puppets an aliens who came to earth to raise the Fun levels! You may have seen them rolling around performing relatable bangers out of their ice cream truck art car, or on stage at one of the hundreds of music festivals they have played at on earth since 2004. Fungineers are playing a late night set at The Egyptian Theatre on Friday, March 24 from 12-1:30am, open to passholders ages 18+.

Gracie WHYTE and Laura BERG create colorful immersive works for non-traditional spaces, investigating the ways in which humor exists within a given circumstance. The antithesis of stale and passive traditional dance experiences, WHYTEBERG shows feel more like an adventure-filled party, leaning into the free-spirited functionality of unorthodox solutions in order to engage inner playfulness.

Since their inception in 2014, WHYTEBERG has produced, choreographed and performed in a range of immersive works hosted by prominent artists and spaces such as Edward Sharpe and the Magnetic Zeros (LA), Seattle Art Museum, Creatington (LA), Automata Theatre (LA), Photon Factory (Seattle), and Treefort Music Fest (Boise).

Founded in 2020 by Roberto Vega Ortiz and Theresa Knudson, Ballet22 exists to push the boundaries of what is possible in ballet by focusing on producing and presenting works, ranging from classical to contemporary ballet, that break gender normative traditions.

Ballet22 is dedicated to commissioning new works that give representation to mxn dancers en pointe, as well as works that amplify LGBTQ+ voices. The company is guided by values of inclusivity of body type, gender identity, and race. In addition, the company aims to create positive change to ballet culture by providing a respectful, safe place to work with equitable wages for artists.

For “Dance is Cringe” they team up with friend and frequent collaborator Elijah Jensen-Lindsey, an Idaho based visual artist and carpenter, whose musical project is With Child.

Project Flux fosters an environment where professionals and students can work together, without hierarchy, to create experiences. It takes the time to transform non traditional spaces into immersive environments that break the fourth wall between performer and audience member. Project Flux is committed to community engagement through project collaboration and weekly community classes.

Created in 2016, Campfire Theatre Collective is a ragtag group of theatre artists based in Boise that believe in new theatre, emerging artists and giving everyone a seat at the table. We are the creators of various local theatre shenanigans, most notably Boise’s Campfire Theatre Festival.

Experience incredible, local and regional art at the new (and moody) Alefort Lounge (21+) and at Sanctuary (all-ages).

Artfort Gallery in the Alefort Tent will feature a variety of visual art across all mediums by Walter Gerard, Sean Ahern, Auberon Design, Heather Tomlinson, Benjamin Hunt, and Animoscillator.

Artfort’s sister gallery can be found at the Sanctuary, an inviting, sober and rest space with arts, music, and performances all week long. This gallery will feature a pop-up by local nonprofit the Boise Hive, an interactive arts experience by Katherine Long, and work from Create X Ruin, Critter, Jessica Larsen, and Emily Wenner.

Sofie Ramos is a full-time artist based in LA and San Francisco and is best known for her large-scale sculptural installations of vibrantly painted and precariously placed household forms and textures that imagine and bring to life other worlds inside/alongside/underneath our own and offer alternative existences for abandoned or forgotten objects. Her practice playfully appropriates elements from everyday domestic life to build up fantastical site-specific compositions that uniquely respond/adapt to, fuse with, and adulterate each new space they inhabit.

Inspired by liquid light shows of the 1960’s, Bleeding Torch Fellowship projects hypnotic liquid visuals over the stage of your favorite musicians and artists. Oil and water, dye and projectors. No computers. Completely live. Our custom light shows submerge venues in psychedelic liquid visuals handcrafted to fit any vibe and sound. Come get wet with us.

Sector Seventeen is an artist collective specializing in aerosol murals. Sector Seventeen will be doing a mural on 14th & Grove throughout the fest and will collaborate with mural artists Ofel, Deps, and Deity.

Evan Lovett is a conservation-based illustrator and muralist based out of Philadelphia, PA.

Sea of Doom (aka Kristin Scholz) is a visual artist working predominantly in paint and fiber. Coming of age in the suburbs of Philadelphia, Kristin was interested in nature, mythological creatures, and her inner world. Her eventual artistic endeavors, collectively bold and graphic in nature, would be informed by the cathartic musical influence of punk and riot grrl, as well as the skate and street art subcultures of her youth. Kristin later attended MICA in Baltimore where she was awarded her BFA in Illustration in 2005.