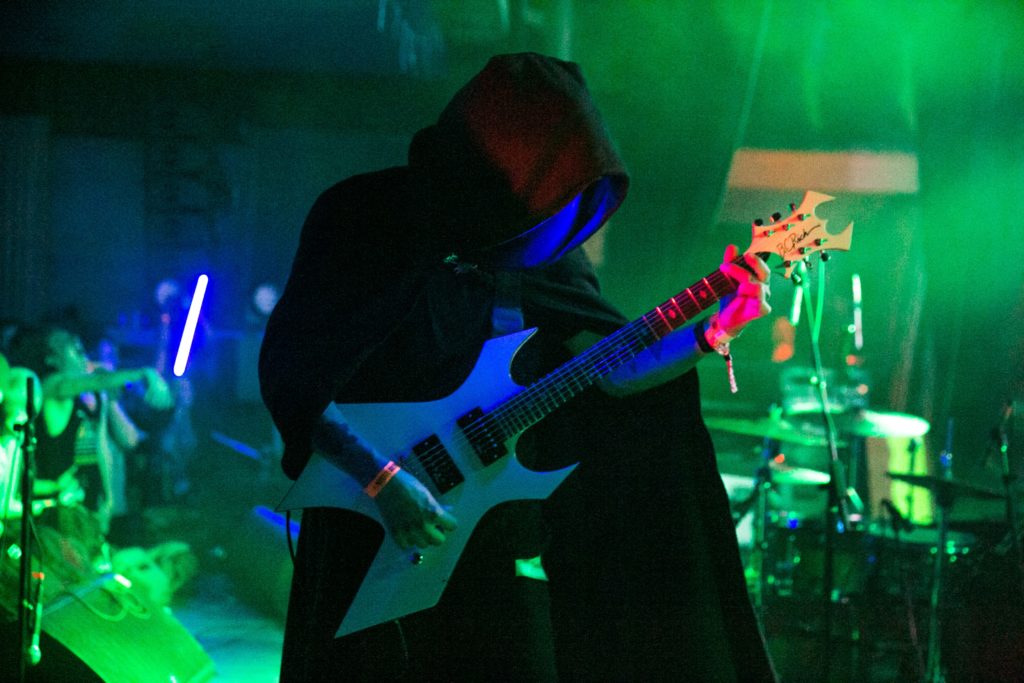 As a part of Treefort 10’s Deep Dive Series, we’re diving into Treefort 10 artists that our team recommends if you like (RIYL) Treefort Alum Magic Sword.

Magic Sword has been a killer staple act at Treefort throughout the years. Magic Sword is gracing the stage at Treefort 10 PLUS there are many artists with a fun, electronic vibe coming this year that you are sure to love if you’re a Magic Sword fan.

Dive into the artists below:

LISTEN TO THE PLAYLIST BUY YOUR PASS TREEFORT APP

Street Fever is a dark seductive techno project within a world full of chaos and destruction. From club beats to breakdowns Street Fever offers a show unlike any other Techno project filled with high energy and live performance art thats sure to make you sweat.

Trash Fence is a conglomerate of International Hot Dog vendors from Boise, ID that discovered the path to enlightenment through a series of secret methods learned through an ancient desert cult during a temple burning ceremony. The first step of this transformation is to open a portal to another dimension by building ‘The Astral Conduit’ and using cutting edge light programming fused with magic and music. The second step is to writhe and gyrate in a rhythmic pattern until your molecules bind with this portal to achieve ‘The Cosmic Rapture’ at which point you will ascend to a level of bliss you have never experienced. Meet us at the Trash Fence.

A fierce friend to many who come to SF, she’s already played direct support by personal request for Justin Martin, Walker & Royce, Prok & Fitch, J. Worra, Sacha Robotti, Ardalan, and more at esteemed venues such as Audio, The Midway, and Halcyon.

A rising producer, MISS DRE has released heat on Insomniac IN/ROTATION, Box of Cats, Anabatic Records, Psycho Disco!, House of Hustle, along with her most recent releases, ‘Technocality’ on Farris Wheel and, “Take It All’ on My Techno Weighs A Ton. Her tracks have garnered support from contemporaries the likes of Gene Farris, J. Worra, VNSSA, Sacha Robotti, Codes, and more.

A surprise vocalist capable of sultry spoken word and confident hooks remembered long after leaving the club, her voice has charted #1 on Beatport (‘Parties Follow Me’, Slothacid 2020) and one her newest features on Hey Bite This, “What You do” with Zendlo is already gaining traction on the dance floors.

Drea Kaplan, best called MISS DRE. A singer/songwriter from a young age, she first found house music at Northern Nights in 2014. The love was immediate and effortless – she’s been aligning stars and spotlight ever since. Get lost in her vibe and be ready to leave it all behind. When MISS DRE’s moving, you’re moving. Find the dance floor please.

ACUDETH is a 2-performer project focused on pushing the boundaries of what Electronic Dance Music really means. By doing things like turning a guitar into a synthesizer, changing the way EDM is performed live, and creating sounds the likes of which nobody has ever heard before, ACUDETH is redefining the way electronic music is made and received. Influenced by San holo, Virtual Riot and Mac Demarco, ACUDETH has found a way to blend the energy of incredible sound design with the nostalgia of acoustic sounds to create something new. By combining ethereal, wet, live guitar with the traditional DJ set, every live performance is different and thought provoking.

Since ACUDETH’s debut at Treefort in 2018, the artist has picked up interest and has since released singles “New Electricity” and “Electric Smile”, garnering attention online. With a completely revamped live performance for 2022, the artist has transformed from a startup artist still finding their sound, into an up-and-coming artist with a profound vision and original sonic identity.

In 2015, Lopez’s life was turned upside-down by grief and loss: Her father took his own life and six months later her best friend passed away in an accident. Still, Lopez kept working even as her emotions went into overdrive. She went from being a high-functioning depressed person to dealing with the most crippling mental health experience of her life. But by 2018, she began the healing process and found therapy and medication that worked for her.

After leaving Warner Bros. Lopez signed to Carpark Records in April of 2019. Six months later, she shared a taste of what listeners will hear on HYPE NOSTALGIA with the release of the EP, SLEEPER HOLD. Filled with emotional intensity and self-reflective songwriting, the three-song project confronted the emotional rollercoaster that she’s been riding for the past five years, head-on.

Dresage is the brainchild of Keeley Bumford, an artist/producer/composer based in Los Angeles. In her world of creativity with Dresage as the vehicle, she creates lush synth and orchestral musings, allowing herself the freedom to inhabit many genres, from dreamy synthwave to indie art pop. Clash Magazine calls her “pop from an alternate universe driven by a commitment to personal communication…honest, creative and forever outside the box.”

In 2021 came Terror Nights / Terror Days – Dresage’s entirely self produced sophomore EP. It serves as a personal journey of self belief and evolution. With lush arrangements of synths, strings, harp, drums and Bumford’s signature vocal production, Terror Nights / Terror Days is truly future forward pop. Leaning left, inventive and still catchy enough to not be able to get melodies out of your head. Not one to hold back the honest details of her thoughts, Dresage meditates on what it means to be a human and artist in our current society, always eager to excavate the meaning of it all.

Among her collaborations, most notable is her feature with Jai Wolf on “Better Apart,” which just passed 8 million streams on Spotify. She has performed it live alongside him at Austin City Limits Festival 2019, a sold out Emo’s Austin during ACL, as well as 2 sold out nights at the Shrine Auditorium in LA. Her cover of Bob Marley’s Three Little Birds with sync powerhouse & collaborator, AG was recently placed in season 3 of Virgin River on Netflix. The placement resulted in over 110k Shazams, the #3 position on the Shazam viral chart, 370k Spotify streams and also the #8 spot on the top 10 songs in television Billboard chart for July 2021.

She has credits as a producer & composer having recently written/produced & performed five original songs as well as co-scoring the original Hulu/Blumhouse film, My Valentine, from the “Into The Dark” anthology series. She was in the beloved YouTube series “4 Producers 1 Sample” with Andrew Huang, and actively works within the film/tv sync world with recent placements from Apple, Netflix, UNIQLO, Nintendo, Disney and more. While sculpting songs that ponder feminism & mental health, Bumford is most passionate about spreading the autonomy of self-recording and production to women, BIPOC, and folks along the gender and socio-economic spectrums who have been historically kept out of such spaces. She regularly collaborates with femme-driven initiatives to bring more equity & training to upcoming producers. Dresage is currently working on her debut album coming in 2022.

DANCE WITH THE DEAD

Dance with the Dead is an electronic based music duo by Justin Pointer and Tony Kim. Inspired by retrospective movies and music from the 60’s, 70’s and 80s, their sound reflects heavily on the analog synthesizer sounds, and early heavy metal guitars. They released their debut record Out of Body” on October 31st, 2013 to great reviews in the synth, metal, and EDM communities alike. The duo has toured along side of acts such as Devin Townsend, Avatar, and Dragonforce as well as headlined shows in USA, Canada, France, Belgium, Germany, Iceland, Russia, Belarus, Riga, Talin, Scotland, United Kingdom, Ireland, Netherlands, Czech Republic, and Ukraine.

Tempestarii distill black metal into its sentiment of cathartic ritual through immersive live performances. The band has existed since 2013, previously as IX. Russian label Chaos At Feast is the latest chapter in the Tempestarii legacy, since beginning in 2012. Early productions were raw and low fidelity until the band lineup expanded into a live unit that explored repetitive themes and trance-inducing songs.

Bringing a potent atmosphere, lit only by candles, Tempestarii pulled listeners further into their realm. Tempestarii delivered it’s candle-lit performance at Red River Fest In Austin, Texas in 2018, and 2019 saw the bands first headlining international tour through Canada and the Pacific Northwest, stopping to headline Edmonton’s Black Mourning Light festival along the way.

High Step Society is a dance party from another dimension; a high-flying, beat-dropping big band rocket ship with an ear to the past, and both feet on the gas.

Their mission is to bring people together, to create a celebratory space that transcends the troubles of this world. Capturing the spirit of the Jazz Age and launching it a century forward, this band breaks down the divisions between us and replaces them with the irresistible urge to dance together.

High stepping is a state of mind, and a movement to be part of. Dress yourself up nice, act classy, and lift your best foot way up to the sky. Hop on the HSS Express and let’s ride this wave together towards better times.

High Step Society is bringing jazz back to the party, where it belongs.

Not many up-and-comers from the Northwest already have experience in stage design, label management, talent buying, graphic design, web development, music production, and premier DJ’ing. As a selectah, Kissay champions multi-genre broken beats and heavy low-end textures, but he also has deep roots in both house and techno. His productions flirt with deconstructed club and a melodic minimalism to evoke an intimate yet alien emotiveness. Combining his multimedia skill set, Kissay intends to redefine the contemporary categorizations of electronic music and the culture that surrounds it. Kissay is an example of the refreshing step forward that the underground scene can take in the upcoming generation.

Ham’s House is a Denver based house artist. Taking influences from Dirty Bird, Repopulate Mars, and Sink or Swim. Ham’s House has just released a song, “No Idea” through Rework Records based in Chicago with much more down the pipeline. He has played multiple ticketed shows at venues such as Your Mom’s House, Viceroy Lounge, and Larimer Lounge. He also played a show produced by Nite Rince, where he opened for Mr. Carmack. We guarantee that after three Ham’s House songs everyone in the crowd will feel eminently desirable.