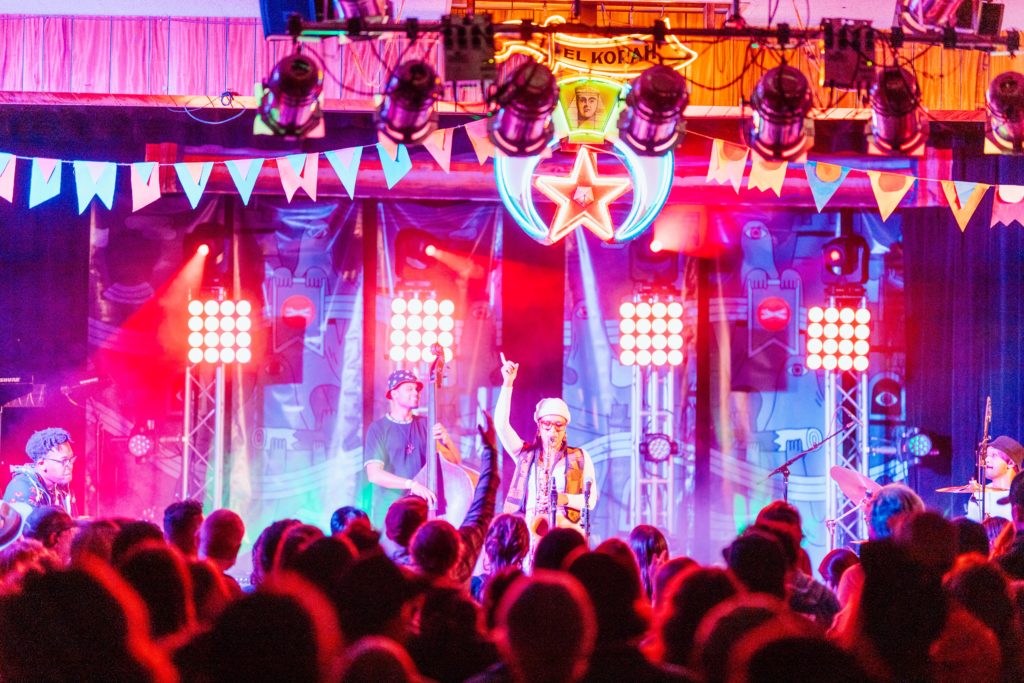 TGIF, amiright? We’re still glowing from the total shredder of Day 2 as we groove into the freakin’ weekend.

Definitely still livin on a high from the amazement that Thursday brought! Did you witness Osees slay Main Stage or MarchFourth’s wild set at The Knit and don’t get us started on that incredible Genesis Owusu banger at El Korah…and everything in between and around (literally SO much!!). Get ready to experience another day! We’re cranking it up with more fort activation and loads of music including a ton of second chance shows!

Get the Deep Dive Series playlists cranking on your stereo… you’ll thank me later. That is seriously the best way to prepare your mind, body and soul for all the greatness there is to take in today!

But before we dive into today’s festivities, let’s relive yesterday thanks to our amazing Treefort film crew:

Pick up your Treefort wristband on Grove between 12th & 13th from 12 – 10pm to get the party started. Single Day passes are running low, so get yours NOW…Box Office is open! Make sure to explore the Treefort 10 souvenirs at Main Stage – everything is in small quantities so snag it up while you can!

Do not hesitate to ask the Ranger Station for help because they are more than ready to lead you to your next discovery.

Dive into all the info here:

Get your Friday groove on at Main Stage* with multi-instrumentalist Jackie Venson at 2:40pm. Then stick around for a funky set by Ata Kak, followed by Fruit Bats influential folk-rock and indie rock songstress Caroline Rose. Closing things out will be the soothing sounds of Durand Jones & The Indications. Breaking up the music acts will be some laughs from Comedyfort performers as they hit Main Stage!

The schedule at Linen Building* today will feature a variety of pop. Catch some pop folk from Tele Novella, and then a lil’ grunge from Black Ends. Some new sounds come to the stage at 8pm with college-student-turned-TikTok-sensation Penelope Scott and Portland-based singer-songwriter MAITA aaaaaaand don’t miss Field Medic.

Looking for a blend of genres, there are great acts all night at The Olympic, starting off with local talent Storie Grubb at 5:30pm, followed by Spirit Award and Meltt. Ending the night with another local Boise artist Daniel Kerr at 12:40am.

Catch some grooves at Neurolux featuring a local groovester Joshua Lewis, followed by Brazilian dream-pop band ATALHOS and Portland-based dark-pop band The Prids! There is no better way to close out the Neurolux than with some garage-punk by Spoon Benders.

This is just the beginning! Enjoy other shows at El Korah Shrine*, The Hideout*, The Shredder*, Sonic Temple, Pengilly’s Saloon, Reef, and The Balcony.

Wanting to master the art of skating!

Get a Skating Lesson in the park with Kiana at Fort Boise Skate Park (E Garrison and Collins Road, Boise)! There is no better teacher that @kianayouwanna, bringing that colorful spice to all lessons 🙂 this will be an incredible experience.

Head over to Boise Centre East (420B) from 4 – 5pm if you’re interested in hearing about the unspoken rules and traditions of restaurant kitchens. Although there will be no food, there will be plenty of food for thought as you listen in on the Copper & Heat Live Show.

You are not ready for this one. Drag Race Season 14 Super Queen Kornbread “The Snack” Jete will be hosting Servin’ it up with Kornbread from 9 – 11pm @ The Balcony. These performers are planning on having you served, fed and gagging on all their beauty!

*Treefort Passholders get in free

Start your day watching a live D&D game or by playing against your friends in a VR arena at the Boise Centre East. Then, sit in on a panel about managing IT, 3D printing, lock picking and more. If you are wanting to get more involved, grab your laptop and head over to BoiseLAN where gamers from all over the Northwest get together to compete in tournaments and talk tech.

Are you a fan of Boise’s Spacebar? If so, you gotta check out The Future of the Arcade where you’ll talk about nerd culture and the indie video game scene here in Boise.

Head over to the Treefort App to get the deets on all things Hackfort.

Take a load off at Filmfort for tonights film, DOWN WITH THE KING, located at The Flicks* at 7pm.

This showing will open with a short film, The Event, directed by Frank Mosley and Hugo De Sousa.

DOWN WITH THE KING is about a famous rapper disillusioned with the music industry and the pressure of being a celebrity. Come find out what he does with his life after leaving the fame behind.

At 12:30pm hear from a cast of professional artists across a wide spectrum of mediums at the Community, Collaboration and Collective Cool Factor: Visual Art’s Role in Music event at Boise Centre East.

Wanting to feel sexy, passionate, empowered, and alive when you dance? Head over to LED at 7:30pm for LED Dance is Cringe to join the movement. This is a ticketed event**

Los Angeles comedian Chris Fairbanks has been performing for over two decades all over the States, as well as on Comedy Central, TruTV, TBS, Fox and Amazon. He will be at Main Stage* at 8:00pm for a quick 15 minute set and the Owyhee Ballroom at 10:00pm for the Late Night Show.

There is no better way to start day three than with some stretching and resetting. Head over to Lost Grove Brewing Taproom for Yoga Grove All Levels Yoga, a vinyasa flow class for all levels. Afterword, head over to the Rest & Restore- Adult Nap Time to connect with your innate wisdom through guided meditation at the Sanctuary. If you are going for the yoga hat trick today, your final event is The Dance Commander Experience. Dance on over to El Korah Shrine to find out how dance as a movement can be accessible to everyone.

Are you a fan of weird tales, at 1pm the Talking Strange Podcast is bringing together a list of notable local names to talk about the haunted aspects of Boise in the Boise Centre East.

Help Two Old Queens determine the gayest movie ever, come back to the Boise Centre East at 6pm to hear from Mark Rennie and John Flynn. This is going to be a hoot!