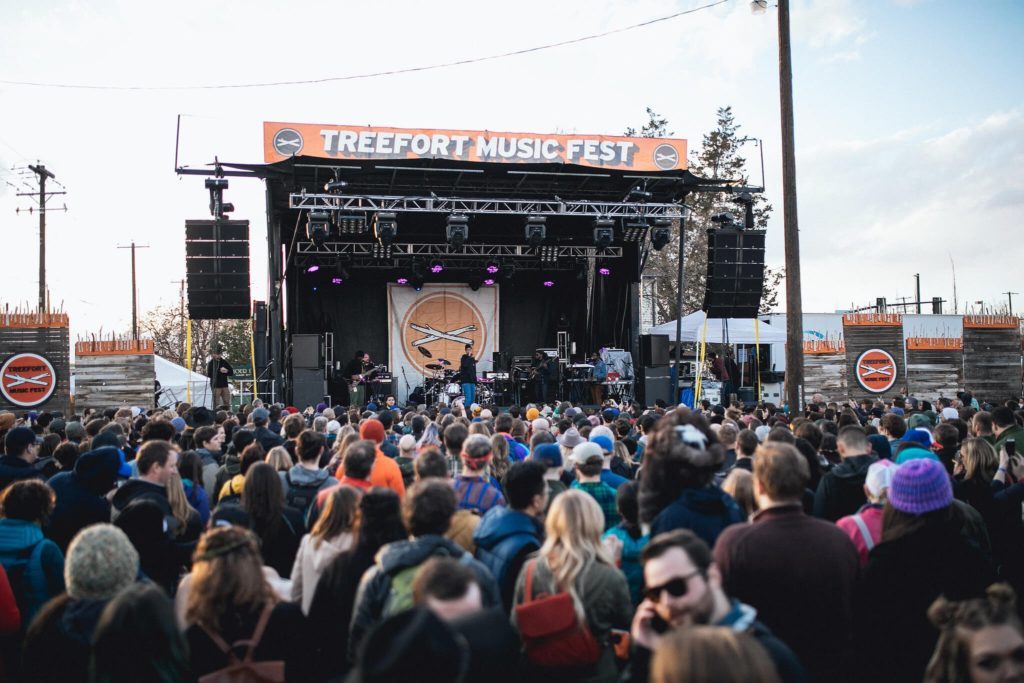 Treefort 2019 was such an amazing journey — thanks for coming along with us!

THANK YOU to every festival goer, band member, volunteer, sound person, presenter, beer pourer (and spiller), filmmaker, craft brewer, storyteller, yogi, dancer, performer,  kiddo, chef and participant for making this week one to remember. It wouldn’t be as amazing without each and every one of you doing your part and making Treefort 8 the best one yet. See you in the fort next year!

We will cherish these beloved memories forever and ever. For now, let’s reminisce all the glory that was this weekend together one last time.

This weekend was great from beginning to end! We started the festival off with ambient electropop shaman East Forest at El Korah Shrine, followed by a slew of funk, soul, and rock including power funk/soul collective The Puscie Jones Revue. Vince Staples packed the house at Knitting Factory and Shiba San kept us dancing all night at Fatty’s!

We learned more about the policies and path to American citizenship at Storyfort, got caught in a WHYTEBERG pop-up performance at The Owyhee, and watched amazing drag performances at The Fort of Drag Boise Drag Extravaganza.

We listened to NPR’s Kirk Siegler talk about life in Paradise after the Camp Fire at Storyfort, experienced immersive sound installation Broca’s Area at LED, laughed with comedians like Sam Tallent at Comedyfort, and chowed down at the Foodfort Street Eats. Ham on Rye was amazing at Filmfort, and we learned about bridging the divide between business and technology when business IS technology at Hackfort.

Treefort 8 kicked into hyperspeed on Friday. Main Stage was LIT, featuring Esmé Patterson, Rituals of Mine, Sweet Spirit, Mt. Joy, and Liz Phair! Alt-pop artist Flint Eastwood kept the party going before electronic-music iconoclast Dan Deacon brought the house down at El Korah Shrine. The snarling static and shattering beats from Low pierced our hearts at Linen Building and then we got up close and personal with Caroline Rose at Neurolux!

We learned about the history and future of Solar Roadways with Hackfort headliner Scott Brusaw. We got all the feels from Selby Jenkins’ de-escalation routes at Boise Contemporary Theater, laughed with Cailtin Weierhauser before Mt. Joy and Yedoye Travis before Liz Phair, and ate the amazing food made by Chef Bonnie Morales at a Foodfort food demo. FUTURE LANGUAGE: The Dimensions of VON LMO at Filmfort was mind-blowing, Laura Veirs’ songwriting workshop at Storyfort was inspiring, and opening ceremony at Yogafort rejuvenated our souls.

We had the party of our lives with Joshy Soul at Main Stage! We were so stoked to have many artists, such as CHAI, Caroline Rose, The Muckers, and Delicate Steve play another set today. We had a funky dance party with Rubblebucket at El Korah Shrine. The night only got heavier with a three hour face melting jam featuring Brett Netson and WEEED at Boise Contemporary Theater! The Linen Building had a great hip-hop lineup featuring Linqua Franqa, Ric Wilson, and Sudan Archives. Six-piece band Sweet Spirit, indie rockers Summer Cannibals, and Portland group Møtrik rocked the Neurolux!

Dennis Garcia and Darren McCain from Hardware Asylum gave an overclocking demonstration while cooling the PC with liquid nitrogen at Hackfort, Caitlin Cullen / Dance widened the perception of what dance can be at Boise Contemporary Theater, and Foodfort alum and James Beard Award Winning Chef Hugh Acheson treated us to a classic steak lunch at Basque Center for Foodfort. Best Feature Documentary nominee at the 2018 Academy Awards, Minding the Gap, entranced us at Filmfort, high school duo Ian & Ally entertained kids and adults alike at Kidfort, and we danced the hangover out of us at Yogafort or got a little hair of the dog with the Fresh AF Idaho brew over at Alefort.

We started the day with a little more rain and closed out Treefort on Main Stage getting down to Toro Y Moi, Rubblebucket, and Sudan Archives! We got experimental with Black Moth Super Rainbow at El Korah Shrine and closed it out with a sweaty hawt DJ set from Rituals of Mine at Neurolux!

We eased our way into day five with Board Game Detox Brunch with Hackfort. Kids and adults alike were enthralled with the Kidfort Dance Battle (in collaboration with Yogafort), Project Flux‘s ‘Hello My Name Is:’ at Boise Contemporary Theater, Comedyfort headliner Sophie Hughes, and the Boise’s Next Drag Superstar Season 3 reunion show at The Balcony. The closing ceremony of Yogafort was the perfect way to end Treefort 8.

What a great time! What was your favorite part? What did you discover? Relive all the moments on our Flickr and our YouTube. Relisten to your favorite sounds with our playlists. Like and follow the artists of Treefort and support them when they tour through your town…psst if you’re in Boise, get in on Duck Club shows.

Thanks again for being a part of Treefort 8. See you in the fort for Treefort 2020!

p.s. In the case you had too much fun and forgot to buy some souvenirs, we’ll have all merch up on our site soon enough, so make sure you sign up for our emails.