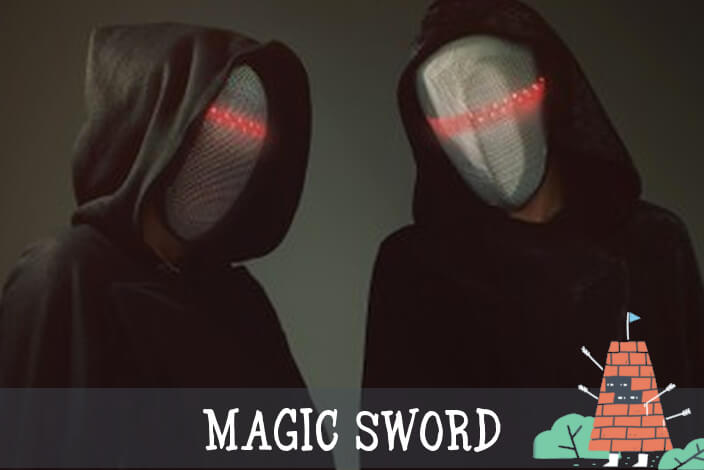 Rumors of the true identity behind Magic Sword began swirling in 2012 when one of the masked, anonymous producer’s tracks surfaced on a radio station in Boise, Idaho. Magic Sword’s debut album quietly found its way onto store shelves, but as word about the project spread through the region, copies of the debut record quickly sold out. Magic Sword made its live debut to a packed venue at the 2013 Treefort Music Fest. Over the next year­-and-­a-­half, Magic Sword brought capacity crowds to downtown Boise’s biggest clubs and shared bills with the likes of Odesza and Slow Magic. Following a series of street-level guerrilla concerts in Portland as well as a few tracks getting placed in GoPro’s “Streets of Japan” documentary, Magic Sword entered 2015 to a flurry of international interest surrounding the act’s involvement with the hotly anticipated video game Hotline Miami 2.

“With a sonic aesthetic that sounds like if John Carpenter had collaborated with Daft Punk on the TRON: Legacy soundtrack, their output is compelling, gothic dance music that is perfect for a sacrilegious rave in catacombs.” – Nerdist

Still maintaining the veil of anonymity, Magic Sword’s debut album Volume One was re­-released in early 2015 on Tender Loving Empire. The epic adventure will begin at 12:00am ET at Cameo Gallery and will close out our Boise & Friends Showcase for CMJ on Wednesday night (Thursday morning). Please TELL YOUR FRNDZ and BUY TICKETS!