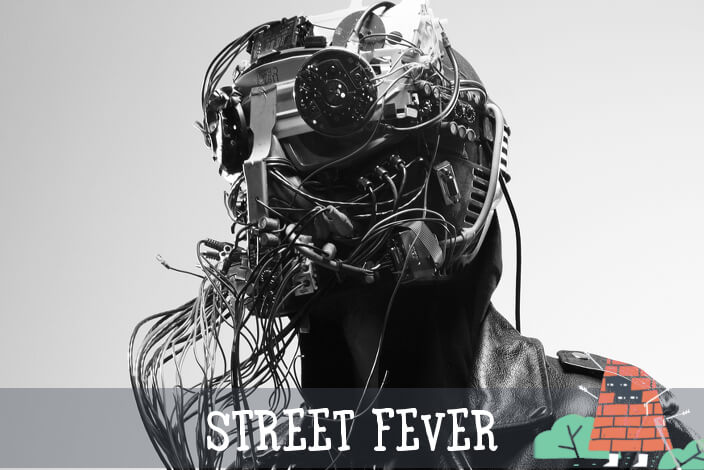 This Boise native turns out dark, synth heavy beats that veer into the avant garde and experimental realms. Known for bashing keyboards, Street Fever stages intense performances with a rotating cast of collaborators. His debut EP Afflictions, released in August via Keats//Collective, has garnered attention from a wide spectrum of critics.

“Blending elements of the bleakest techno and house (think Gesaffelstein and The Hacker mixed Justice and SebastiAn), Street Fever manages to capture and distill the essence of the darkest french touch and shake it together with driving baselines – creating a craft cocktail from hell. Pouring into your ears like poison, this evil EP feels like it was created to destroy the dance floor.” – Drive Radio

“I fell for Street Fever at a venue that half made me believe I’d walked onto a different planet, like I’d slipped dimensions in the smoky alleyway. I was hypnotized and hooked instantly. The man behind this mask has more in store for us than the heart palpitating tracks on his newest EP. There is a world, as he says, being created here and an approach to the project which leaves no creative stone unpainted and unused.” – liveFAST

We’ve always known the man behind the mask was a true talent, but his performance as Street Fever at Treefort 2015 is when he really won us over. Not only is his debut album (aptly titled) Afflictions a well curated selection of songs, his live act is not to be missed. Fall deep in the trance at Cameo Gallery at 10:00pm ET on 10/14 for the Boise & Friends official CMJ showcase. In the chance you want to impress your pals, invite them via the Facebook event and/or pick up an advance ticket for only $8 or pay $10 at the door (free with CMJ badge).