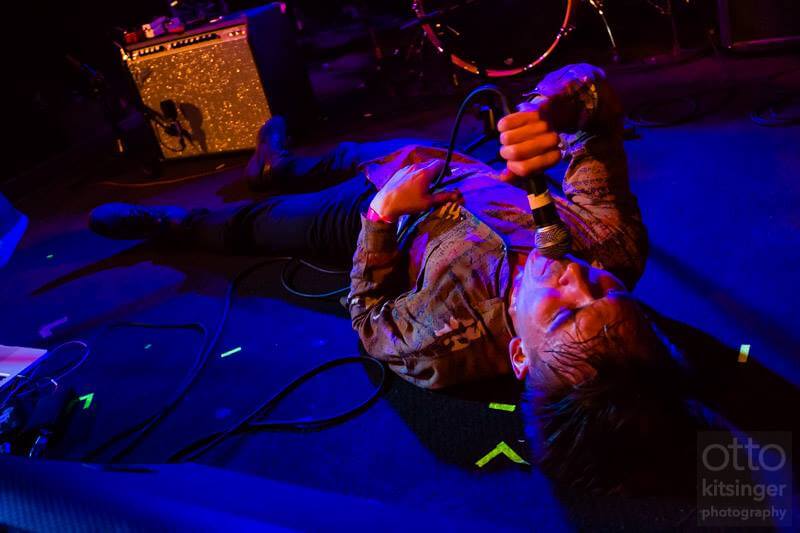 It’s hard to believe ‪another Treefort Music Fest‬ is behind us — a mere two weeks ago we were hugging and saying “Happy Treefort”, luckily we are all still buzzing about what an amazing time we had! A special thanks to everyone who makes this festival return each year. Without the badass bands, the super volunteers, the giving sponsors, the kind city of Boise and the amaaaazing fans, there would be no Treefort. So THANK YOU for playing your part and your overwhelming dedication and passion so strongly on display during the festival that keeps this town alive.

Treefort 2015 was full of awesome moments starting from the home-state, packed out Josh Ritter performance at the beautiful Cathedral of the Rockies that lead to an insanely long line awesome Wild Ones and Geographer sets at Neurolux and the statement-making acts over at Bouquet with the outta-nowhere-blown-away-experience of Adia Victoria followed by Hurray For The Riff Raff‘s awe-inspiring show and who can forget the “let’s get the band back together” experiences at the History of Boise Rock showcase at El Korah Shrine or the smash it and bang it, late night grinding party with Turquoise Jeep down at Crazy Horse?

Wednesday was just the beginning as Thursday kicked things up a notch! We rocked out with Denver’s In the Whale and then later grooved with The Soft White Sixties at Bouquet while the all ages crowd filled Linen Building for indie rock tunes from Baby Ghosts, Happyness and Twerps and Viet Cong blew away the El Korah crowd – their drummer had one broken arm…later we’d find out that Omar Souleyman‘s Syrian dance jams gets festival goers moving (damn, so good!) some of us were stomping to the beat of Jason Webley and Animal Eyes over at the Reef and we got freaky with Hank & Cupcakes at Tom Grainey’s.

Similar to Treefort’s past (well, kinda), Boise’s Finn Riggins kicked off the Main Stage on Friday afternoon followed by the visa-problem-free Slam Dunk saving the day with their rockin set before The Donkeys took us into a state of groove just in time for local indie rock gods Built to Spill stole the night. The weather was perfect and thank goodness for the second chance shows (amiright?) Neurolux was filled with awesome day-time tunes as the Party Boyz took over during the day for a Portland Party then nearby pals Holiday Friends, Hi Oh Silver Oh and Grandparents set the mood before The Dirty Moogs transformed Neurolux into a spaceship and Magic Sword took us all to another level at The Rose Room. Joyce Manor ripped it up at the Record Exchange during the day before their main show at Knitting Factory later that night following a scorching set by New Orleans duo Caddywhompus, and Orquestra Pacifico Tropical got us moving as Delicate Steve shredded us into the wee hours at El Korah.

By Saturday our feet were killing us, but we pushed through for a full day of Treefort music and activities. The off-kiltered solo set by Wetface (Jordan of Slam Dunk) was the best start to a sunny day followed by Yeah Great Fine mic-ing up a Pie Hole pizza box and Foxygen put on a wildly frantically fantastic performance and CAMP Modern hosting the 30-min parody of the entire Star Wars series. Meanwhile the southside was packed with a ton of heavy rock with Alone, For Fucks Sake and Accordian Crimes obliterating The Shredder and outside of Alefort 15+ bands set up for Band Dialogue III. Treeforters gathered like flies to a light at El Korah Shrine on Saturday night to experience the ever-so-amazing YACHT and the eccentric of Montreal or the packed Watercooler for intimate singer-songwriter shows featuring Little Wings, Tony Ortega and Jon & Josiah (The Head and Heart) all following the amazing dance dance party at Main Stage with !!!. Black Milk still has everyone buzzing from his badass set at Knitting Factory and down at Hannah’s Thunderpussy and rare supergroup Mostly Muff performed to a full house, and Boise’s very own Rocci Johnson closed it out before we all flocked to Crazy Horse for the sweaty Wooden Indian Burial Ground moshing or the keyboard-crushing heavy synth-wave set from Boise’s Street Fever at the Linen Building.

Sunday was another packed day of Treefort and found Bloody Mary’s cured our painful feet. As some bands were hitting the road off to their next stop, the fans continued to keep the party going. Music at Neurolux began with an off-the-schedule I Am Sensation set (members of Delicate Steve and Rubblebucket). Groovy tunes at the Main Stage from Transistor Send and Mimicking Birds before Sego got us shuffling under the sun. Emily Wells stuck around all of Treefort, sitting on panels at Hackfort, performing at Yogafort, but when she got the entire Main Stage to a complete silence was when the first tear was shed. Like A Villain kept tears flowing as she mesmerized the crowd before transforming into Luke Wyland‘s set and then the experimental drum session of U*, the sultry C.J. Boyd and the witchey Sun Blood Stories at Watercooler. The Bouquet was filled with western rocknroll as Marshall Poole and Max Pain and the Groovies rocked it and Old Death Whisper wrapped it up. Main Stage was packed with fans and el-wired Giant Squids for the legendary TV on the Radio performance which made for an epic end to Main Stage (rumor has it, Mayor Bieter was Left Squid….just kidding!).  The crowd at El Korah rushed the stage as Rubblebucket members were tossed above heads while still playing their instruments and singing and by midnight the Main Stage was already being broken down (another tear), but Treeforters braved on at a huge dance/hug party as DJs Amber Martin & Prett Berry closed down the Neurolux.

…and let’s not forget the mega-turnout at CAMP Modern to experience the films at Treefort and the epic Dance Battle that ensued on Saturday afternoon (p.s. the winner was a cool 9-year old who chose “dramatic solo” as his performance category), the 4-day yoga sessions, the cool “Datefort” app that is being built as a result of Hackfort’s Hackathon (matches you based on your music tastes and shows), the informative industry panels over the weekend, the ukulele jam sesh at Kidfort teepee and their awesome pop-up crowd surfing, the blood, sweat and tears shed over at Rigsketball and all the laughs at Comedyfort. Thank goodness for the detox sessions with Yogafort so we could booze back up later that day at Alefort, speaking of which did anyone try that delicious Italian beer that’s aged in clay? SO GOOD!

It was certainly a festival to remember. What were your favorite memories? Favorite discovery of Treefort? How are your dealing with the post-fest blues? Tell us about your experiences in this awesome survey (we realize that doesn’t sound that awesome, but we are always looking for ways to improve and your feedback helps us achieve that). Relive the memories on Treefort’s Flickr photostream up now and keep your eyes peeled for a recap video to come out later this summer!

From the bottom of our hearts, THANK YOU again for all of your support and we look forward to hosting the next edition of Treefort in 2016 with you!