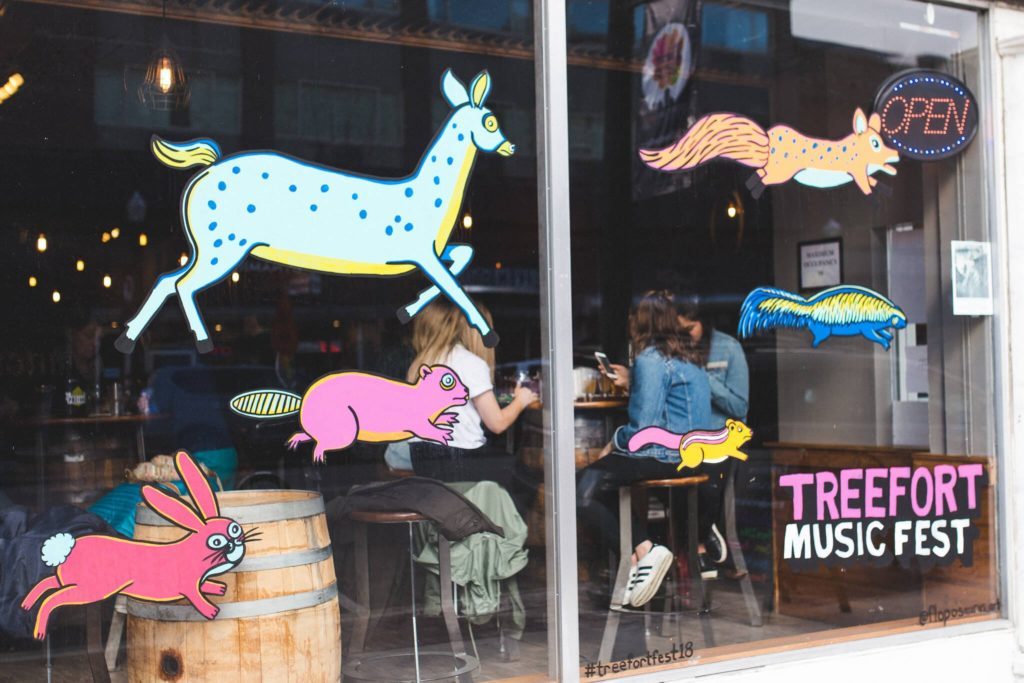 Treefort Music Fest is just around the corner! We’re kicking things off with the annual First Thursday Window Walk, a pre-festival party at the Treefort pop-up headquarters, and many other First Thursday events.

Just like Treefort, there’s something for everyone this First Thursday, March 7th. Walk around and see how local artists have transformed Downtown Boise with Treefort vibes, or listen to tunes at various venues across town and see a live show!

Here’s how you can get Treefort Ready this First Thursday:

Join us for a pre-festival party on First Thursday 5-9pm at the Treefort pop-up headquarters located at 1507 W. Main Street. Treefort 2019 tunes will be blasting, Timber Giant will be flowing, merch will be on deck and festival tickets will be available for sale. This party is free, all ages, and open to the public.

During the fest, this venue will be home to Boise All-ages Movement Project (B-AMP) and will host a number of awesome shows that are open to anyone with a Treefort Pass.

Bring your steel cup (or treat yourself to a fancy new insulated one) to fill with tasty beer. Let’s stay green people. P.S. beer money goes to Boise All Ages Movement Project (B-AMP)!!

There will be an art walk around downtown with an assortment of businesses and artists involved. Businesses will display Treefort-inspired art from local artists on their windows. Walk around Downtown Boise and see what these artists created!

Enjoy a live set by Polyrhythmics before their Neurolux show and free beer (21+ with valid I.D.) from Woodland Empire and Mother Earth, including Timber Giant Pale Ale, the official beer of Treefort 2019 brewed by Mother Earth! There’ll also be a 5-day Treefort Pass giveaway! If you don’t have your Treefort Pass yet, you can purchase it at The Record Exchange.

CRUMB + LOVING + JUICE AT THE SHREDDER

Presented by Duck Club
Woozy, jazzy rock n rollers Crumb are coming back to town on First Thursday, March 7th, for an all ages show at The Shredder with special guests Loving and locals Juice. Doors open at 7pm. $13 tickets on sale now online or at the Record Exchange ($15 at the door).

Presented by Duck Club
Seattle’s hypnotic funksters, Polyrhythmics, are coming to Boise on First Thursday, March 7th, for a stellar show at Neurolux (21+) after their short set at the Treefort Warmup Party. Doors open at 7:30pm. $12 tickets on sale now online or at the Record Exchange ($15 at the door)!

FIRST THURSDAY WITH TREEFORT AT HOME

If you can’t join in on the First Thursday fun, bring Treefort home with you! Buy Timber Giant Pale Ale, the official beer of Treefort 2019 brewed by Mother Earth Brewing Company and kick back with Treefort playlists while you plan your Treefort schedule on the Treefort App. Make sure your Treefort Ready by checking out the Treefort online merch store.