Having Treefort withdrawals? So are we.

While Daytrotter was in Boise, they recorded 26 sessions with both local and touring artists at The Tonic Room Recording & Mastering Studios during Treefort Music Fest. Audio sessions from Doug Martsch, The Coathangers, Chain Of Flowers, Thick Business, The Infamous Stringdusters, Marco Benevento, and many more will be released on daytrotter.com starting May 1st! 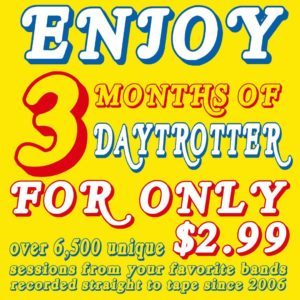 The Daytrotter team left Boise feeling inspired by the overwhelmingly supportive arts & music community that thrives right in our city. As a thank you, they’d like to extend a personal invitation to take advantage of a seriously sweet membership deal going on so you can hear what went down during Treefort. From now until May 5th, sign up for Daytrotter and enjoy 3 months for only $2.99, just use promocode LONGERDAYS at sign up!

Along with the audio sessions premiering from Treefort, they have sessions from many of the 2017 headliners – like Mac DeMarco, Lizzo, The Growlers, STRFKR, Lower Dens, The Bouncing Souls, and more – already on daytrotter.com from years past! Between May & June, they’ll also be releasing some of our most exciting sessions recorded so far this year, including sessions from SXSW & their Daytrotter Downs festival, like Joan of Arc Band, Post Animal, Wyclef, Modern English, NE-HI, and more.

These recordings are raw, handled with care, tracked straight to tape, and waiting to be discovered by you on daytrotter.com. Let’s discover your new favorite band together!

Aaaaaand, ICYMI, here are all of the LIVE Facebook streams from Treefort: